John Henton will never forget where it all started…on the road.  John continues performing in clubs, writing new jokes, and traveling the country. But TV is always calling.  Most recently, John did a guest role on TV One’s sitcom “Love That Girl.”  He appeared on Comedy.TV and a guest role on a “Hannah Montana” episode.  Back in July of 2005, John performed at the Montreal International Comedy Festival – Just For Laughs.  Initially scheduled for one performance at their “Uptown Comedy Show,” John had the audience in so much laughter, that he was asked to perform at the second show. John has also paired up with former “Living Single” co-star Kim Coles and together they have delighted audiences as well.

After having nine successful years on network television, John Henton established a name for himself as a leading comic talent.  He is fortunate to be among an elite group of actors who found success on the small screen.  He found a loyal and endearing following through the lovable and sensible character of “Overton Wakefield Jones” on the FOX hit sitcom “Living Single,” and the loyalty continued with fans embracing the character of “Milsap” on the sitcom, “The Hughleys.”  For its third season, “The Hughleys” moved to UPN, and contributed to the network’s very successful Monday night line-up.  “The Hughley’s” wrapped its fourth and final season in spring 2002.  John’s stellar television work has not gone unnoticed, as he was recognized in 2001 and 2002 with an NAACP Image Award nomination for Best Supporting Actor in a Comedy Series.

Born and raised in Cleveland, John Henton never entertained the thought of a career in comedy.  In 1982, while working during the day and studying computer science at night, Henton was urged by a co-worker to try his jokes at a local comedy club’s amateur night.  By his second night, Henton won the amateur night contest and began stand-up part time.  Henton made the move to Los Angeles in 1985 and by 1988 started his stand-up career full time.

After taking his comedy on the road for a year and winning the 1991 Johnny Walker National Comedy Search, Henton was spotted by “The Tonight Show with Johnny Carson” comedy executive, the late Jim McCawley, who booked him for a performance on the show.  As he finished his set, Henton looked to Carson for his approval and received much more.  Henton was called over to take a seat on the coveted couch where Carson asked him if he had an agent.  To Henton’s reply of “no,” Carson mugged, “Well, you will after tonight.”  It was a performance that Henton says gave his career a “serious jump-start.”

Henton has made appearances on “The Arsenio Hall Show” and “Bob Hope’s Young Comedian’s Special” as well as returning to “The Tonight Show with Jay Leno.”  In January 1993, Henton starred in his own half-hour comedy special for Showtime, “John Henton: Comedy With An Attitude.” John performed on Comedy Central’s “Premium Blend” to an overwhelming audience response.

In April of 1993, Henton was cast in the FOX TV series “Living Single” starring Queen Latifah, Kim Fields and Kim Coles.  The show received stellar ratings, and TV Guide selected Henton’s character as one of the “break out” characters of the 1993-fall season. When the show came to an end after five years, Henton was proud and pleased with the work he had done on the show.  He continues to be a favorite on talk shows with appearances on “Weekends at the DL,” “Best Damn Sports Show” “The View,” “Late Night With Conan O’Brien,” “The Howie Mandel Show,” “Roseanne,” “Later,” “Donny & Marie,” “Fox and Friends” and “Politically Incorrect.”

Although Henton lives in Los Angeles, he will always call Cleveland home. He spends his free time with his adorable little girl Nicole Simone Henton.  Currently, he is sharpening his golf skills. 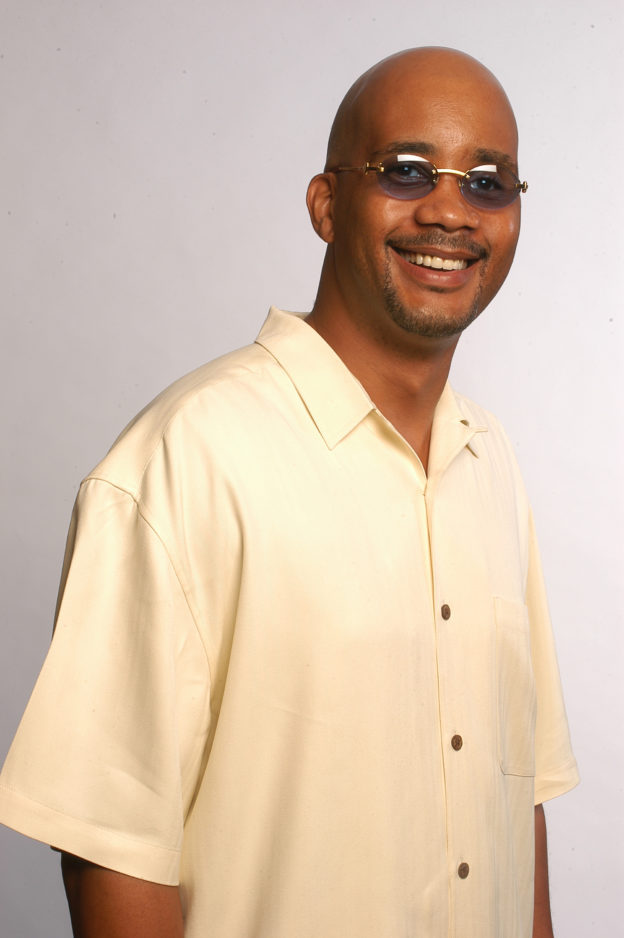