Perhaps Mel Brooks put it best when he said,
“Richard Lewis may just be the Franz Kafka of modern day comedy.”

Lewis has taken his lifelong therapy fodder and carved it into a commanding, compelling art
form. His early career as a stand-up brought him to the top of his ranks. Over time and through a variety of mediums, he broadened his exposure and more and more came on board to appreciate his brilliantly warped world.

The NY Times said, “This renowned comedian, often considered to be the heir to Lenny Bruce, is a master of long form storytelling who turns his endless neurotic energy into brilliant comedy.”

Comedy Central has recognized Mr. Lewis as one of the top 50 stand-up comedians of all time and he was charted on GQ Magazine’s list of the ’20th Century’s Most Influential Humorists’. In December of 1989, Lewis achieved a very personal goal…he performed at Carnegie Hall to a standing room only audience.

2017:
Richard returns to Curb Your Enthusiasm for the 9th season and continues to add select cities to his “Tracks of My Fears” tour schedule. The iconic comedian was featured in two of the episodes of CNN’s History Of Comedy.

Television:
Lewis loved being part of HBO’s “Curb Your Enthusiasm” and is more than elated he’ll be back for a ninth season! The eight season series had SAG nominate Lewis for his work in the ensemble category for his recurring guest star role, playing true-to-life as one of Larry David’s closest friends in “CYE.” The show has garnered many awards to include 39 Emmy nominations and much high praise. Vanity Fair stated, “The supporting cast of Larry David’s Curb Your Enthusiasm is a murderer’s row of stand-up comedians–Jeff Garlin, Susie Essman, Richard Lewis, Cheryl Hines, Shelley Berman–cutting loose in character roles with killer instinct.”

Through the years Richard has received much kudos for his work alongside his buddy, Larry David. The New York Times commented that, “…not nearly enough of Richard Lewis, whose job is the hardest of all because his character must truly suffer and endure in a context where feelings are as anathema as M&M’s in a dentist’s office. Never upsetting the show’s distinct tenor of emotional apathy, Mr. Lewis here showcases his particular genius through a bout with kidney failure. He needs a new one, and oh, by the way, guess who isn’t donating?” The Los Angeles Times added, …”But it’s comedian Richard Lewis– himself famous for an act built on despair–who memorably sulks his way through a pair of early episodes as one of the few people in the business who can match David hang-up for hang-up, neurosis for neurosis…David and Lewis reluctantly help a blind man move furniture in his new apartment. It’s a classic.”

Stand-Up:
Still after all these years, Lewis remains addicted to performing before live audiences and is on a continuous “Tracks of My Fears” stand up tour. In live performance he is often compared to a jazz musician for his wild riffs that fly out into space but always find a way to float back into rhythm as they splatter recurring themes against a spiraling, lyrical backdrop. Howard Reich of the Chicago Tribune recently noted, in a piece comparing comedy and jazz, “In Lenny Bruce’s fantasy, celebrated writers would say: “This guy is the greatest jazz sound in the world – he’s so hip, his name is Lenny Bruce.’ “To this day, Bruce’s foremost heir — comedian Richard Lewis — conveys the lightning energy of a solo by bebop icon Charlie Parker.” A N.Y. Post article noted; “Richard Lewis built the strongest stand-up comedy career on a blazing trail of neuroses since Woody Allen.”

Another time Reich reflected on his history with Lewis. “Nearly 20 years ago… I headed for Zanies and witnessed the most audacious comic wordsmith this side of Lenny Bruce: a young neurotic comedian named Richard Lewis. Ever since that revelatory evening, I’ve followed Richard’s ascent as perhaps the most gifted comedian of his generation.” Indeed others agree. The Baltimore Jewish Times said, “Lewis is oftentimes compared to the late Lenny Bruce, the prolific, dissenting comedic voice of the ’60’s. And the two share many things in common– Judaism, an uncommon intelligence and irreverence for topics considered untouchable. Like Bruce, Mr. Lewis lays his soul bare on the stage, with fearlessness and many times, recklessness…” City Weekly of Salt Lake City concurred, “Nowhere will you find an entertainer so committed to his craft as comedian Richard Lewis…. His ability to keep people laughing at his self-loathing and dark views on every aspect of his life is what keeps him one of the greatest comedians of all time.”

At Mort Sahl’s birthday tribute, featuring a who’s who of comic genius, Mark Groubert writing for Crooksandliars.com, commented.: “But this Night at the Opera belonged to
none other than Richard Lewis who has hit his comic stride entering the free form worlds of both Lenny Bruce and the under appreciated Lord Buckley. Groovin’ high, and dressed in a zippered black suit possibly designed by the mistress of the Dali Lama, the ‘Prince of Pain’ came to compete. Melting the house and forcing grown men to weep openly Richard Lewis bombarded the crowd from one obtuse comedy angle after another. If this was the comedy World Series, Lewis was the King in his Court. For nearly twenty minutes he induced non-stop howling by every living, breathing thing in the house.”

Philadelphia’s City Paper says, “Indeed, he is the Jimi Hendrix of monologists, whose virtuoso free-form riffs on ex-girlfriends, family and other antagonistic denizens from hell are delivered in a mesmerizing, stream-of-consciousness frenzy, a piss-yourself-laughing assault on the senses. Not only is he one of the undisputed masters of postmodern comedy, but also to incurable, self- loathing neurotics he is a patron saint who deserves to be canonized”.

Lewis created a 2 DVD box set released, “A Bundle of Nerves,” which put together a montage of this creative cross section spanning 40 years. It includes a vintage comedy special, the dramatic film “Drunks” in which he starred, a made-for-TV film that he wrote and starred in that aired in the SNL time slot (1979) and a documentary touring his home and collection of artifacts and art from generations of those who have inspired him.
Vintage Lewis is available in the box set of his “Concerts from Hell” (The Vintage Years), containing three comedy specials: HBO originally aired “I’m Exhausted,” earning him an ACE nomination for Best Stand-Up Comedy Special and “I’m Doomed”, his second for HBO, also earned an Ace nomination. His cable-special debut, “I’m In Pain” had aired on Showtime. Playboy says, “Kvetching is elevated to surreal art in these great comedy performances. The titles say it all. Don’t miss.”

On the Literary Scene
In 2015 powerHouse books published “Reflections From Hell: ‘Richard Lewis’ Guide on How Not to Live” for which he collaborated with longtime friend and patron of his, the extraordinary NY artist, Carl Nicholas Titolo. Titolo puts his genius to Lewis’s wildly warped and often profound musings, which turned into a dream team of “poignant craziness.” Larry David, Lewis’ lifelong friend and also a patron to the artist, contributed a mind-blowing Foreword.

In 2000, Lewis wrote his memoir, “The Other Great Depression,” published by the prestigious Perseus/ Public Affairs. It is as brave, insightful and forthcoming as is his comedy. He deconstructs his substance abuse and recovery, skewing it his unique way. The book is a collection of fearless, essay style riffs featuring Lewis’ dark stream-of- consciousness personal observations. Also, the reissue of “The Other Great Depression” is on audiobook, read unabridged by the author for Phoenix Audio. “Richard Lewis
Naked,” a documentary following Richard behind the scenes on his promotional book tour, is also available.

The Huffington Post said this of the book: “Other than Lewis’s paperback catharsis, which probably belongs in the alienated, dyspeptic Jewish-American canon along with Philip Roth, Henry Roth, Lenny Bruce, and all the rest, comedians’ memoirs tend to be pretty breezy–and very short–reads…” New York Magazine said, “Lewis’s standard of total honesty has allowed him to unearth neuroses he’d never even touch onstage–or on the couch.” Entertainment Weekly added, [An] urgent, nervous, heartfelt book . . .Lewis
writes with an addict’s jumpy restlessness, staggering from hurt to hurt, from tensely jokey confession to confession, from twitchy spiritual discovery to discovery.”; –USA Today said it was “Candid and inspirational.” ; While the Cleveland Plain Dealer notes, “Lewis” has narrative gifts few celebrity authors exhibit.”

Lewis has been a contributing writer for Playboy Magazine, writing numerous pieces over the years and has penned many articles for numerous publications over the years.
He has been featured, mentioned and has contributed to countless books and most recently, “I’m Dying Up Here,” which chronicles the collective coming of age of the standup comedians who defined American humor during the past three decades: Letterman, Leno, Robin Williams, Andy Kaufman, Richard Lewis and Garry Shandling among others, by author William Knoedelseder.

Film:
His first defining film role was with his appearance in “Leaving Las Vegas,” which set the stage and led to his first major dramatic role as the lead character, Jimmy Epstein, an addict fighting for his life in the indie film, “Drunks,” along with a brilliant cast that includes Dianne Weist, Faye Dunaway and Amanda Plummer. Built around an AA meeting, he received rave reviews. He also starred in the multi-generationally beloved “Robin Hood men In Tights.”

In closing:
With scores of diverse guest acting appearances in TV series and films, the closest to his heart was his four year run in ABC’s critically acclaimed series “Anything But Love,” co-starring with Jamie Lee Curtis, in “Anything but Love”. “Diary of a Young Comic,” now considered a cult classic film, in which he had the lead role and co-wrote, first aired on NBC in the “Saturday Night Live” time slot at its highest ratings period. Late night TV viewers and media junkies in general are familiar with his frequent guest appearances. He may hold title to having the most late night appearances, chalking up well over 100 appearances with Dave, Carson, Jay, Conan, Jon, Fallon and Stern.

Regarded by his peers as a ‘comic’s comic’, Lewis’ neuroses have become a part of our vernacular as in the now iconic, “I had a date from Hell!” He finally got his due when
Yale’s Book of Quotations attributed the now-common phrase, “the [blank] from hell” to Mr. Lewis in 2006 and now, in 2017, the historic NYC Friars Club is naming the Men’s Room after him. He’s speechless.

In Richard’s own words –“I go on a long tour and make people happy that they’re not me.” Richard is especially grateful for being sober for over 23 years. 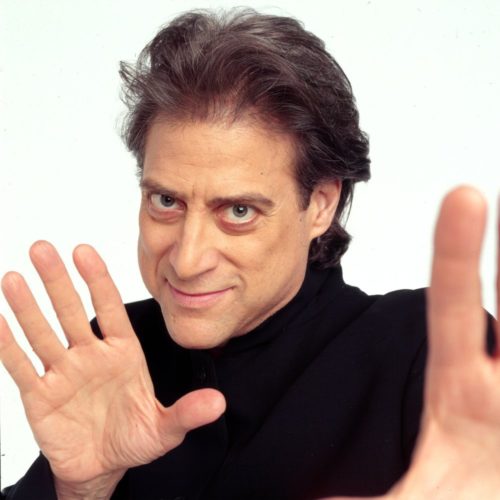 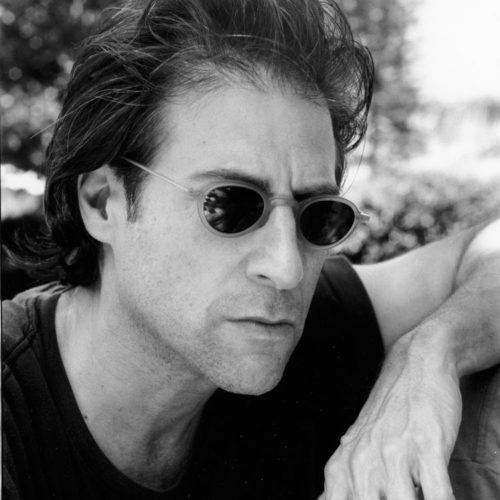 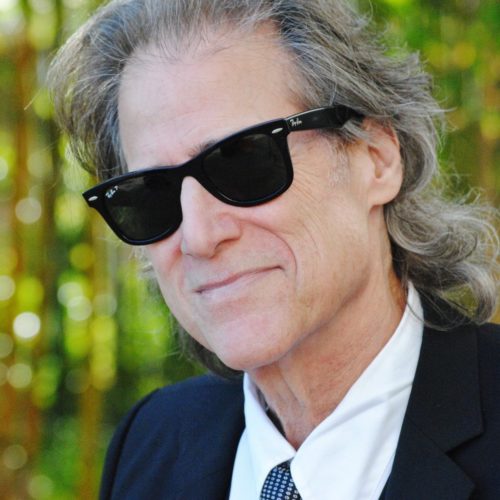 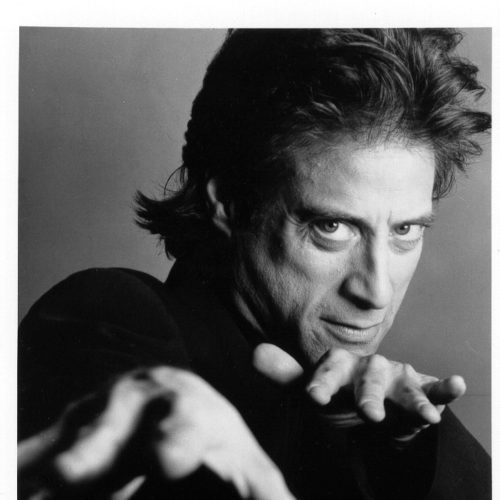 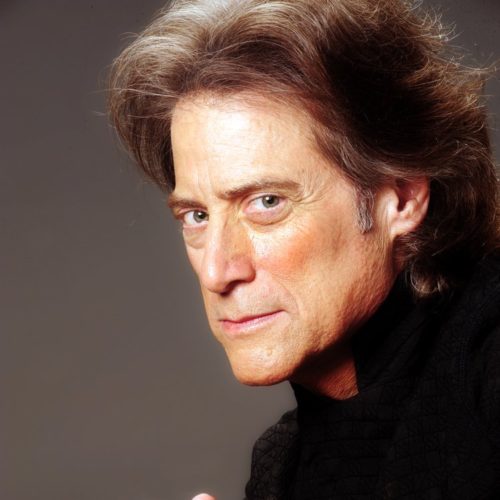 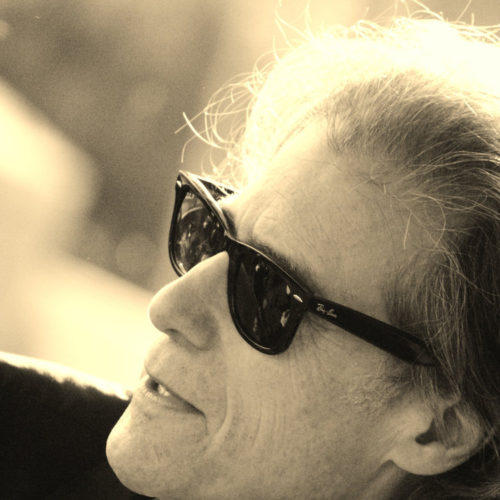