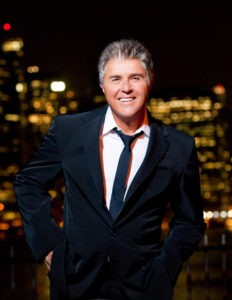 Steve’s show will feature selections from his newly-expanded Back to Bacharach album, his 2018 #1 album, A Song For You, as well as various favorites from the Great American Songbook including songs he has performed in major motion pictures.

The New York Times declared, “Mr. Tyrell is a terrific storyteller… his sizable voice filters Louis Armstrong through Ray Charles and Dr. John.” Ten of his 11 albums have achieved top-five status on Billboard’s Traditional Pop Charts, with his most recent, A Song For You reaching #1 earlier this year. In October, Steve Tyrell will release a 21-song extended edition of his 2008 chart-topper Back to Bacharach. The album, a homage to Tyrell’s friend and mentor, Burt Bacharach, features seven additional Bacharach classics.

Steve Tyrell has appeared on The Today Show The Tonight Show, The Talk, The Late Show with David Letterman, Good Day NY, Good Day LA, and Tavis Smiley, among many other national television shows. His music and his production set the backdrop for a myriad of movies, including Father of the Bride (Parts I and II), Something’s Gotta Give, The Informant, and An American Tail. He is also featured in this year’s documentary, Always at the Carlyle.

Steve Tyrell’s Carlyle run is a holiday tradition, a fact not lost on his faithful and often notable audience. It was widely publicized that Bill and Hillary Clinton came to see Steve perform on one of her first nights out after the 2016 election. He has also played for Presidents Bush and Trump. Tyrell has performed on stages all over the world, entertaining the likes of President Santos of Columbia, Prime Minister Netanyahu, and Archbishop Desmond Tutu, as well as Prince Charles at Buckingham Palace.